BRYANT GOZALI is a student of the Grammy Award-winning cellist Antonio Lysy at the UCLA. He graduated from the Cleveland Institute of Music under the tutelage of Cleveland Symphony Orchestra Principal Cellist, Stephen Geber. Exposed to music since early childhood, Bryant began his formal cello training at age nine with the Director of the Xiamen University Arts Department in China, Professor Su Li.

In 2007 Bryant’s relocated to Singapore to continue his studying with Hermina Ilano,  Singapore Symphony associate principal cellist. At the same year, Bryant was appointed Principal Cellist of both Singapore Independent Anglo Chinese School and Orchestra of the Music Makers (under the baton of Maestro Chan Tze Law). The Orchestra of the Music Makers won the HSBC Youth Excellence Award in 2009, as well as Independent Anglo Chinese School orchestra received the Gold Medal in the Singapore Youth Orchestra Competitions both in 2007 & 2009. Bryant also won Bronze Medal in the 6th Asian Youth Music Competition Grand Finals. His previous  accomplishments include second prizes in the Ai Qin Bei National Cello Competition in China both in 2004 & 2006.

In 2010, Bryant received an invitation to solo with the Jakarta Simfonia Orchestra (Haydn Concerto in C), which led to a residency as a performing artist at the Aula Simfonia Jakarta Concert Hall. At the same time Bryant stydied  privately with Yao Zhao, principal cellist for the San Diego Symphony orchestra. Year of 2011 brought him a winning at the Great Wall International Music Academy concerto competition, leading to his performance of the Saint Saens Cello Concerto with the Great Wall Soloist Orchestra. In 2014, Bryant was re-invited to solo with the Jakarta Sinfonia Orchestra (Haydn’s Cello Concerto in D).

Bryant currently performs on a Rafaelle Fiorini cello made in 1884, on loan by the Herb Alpert School of Music at UCLA. More about Bryant: www.BryantGozali.net

An accomplished soloist and chamber musician, cellist ANNE SUDA enjoys performing nationally and internationally. Anne recently won the solo division of the Frances Walton Competition in Seattle, performing numerous recitals and outreach presentations throughout Washington as winner. Anne's recent concert highlights include bicoastal performances of the Beethoven Triple Concerto with the Venice Symphony in Florida under the baton of Maestro Imre Palló, and with One Found Sound Chamber Orchestra in San Francisco. Last summer Anne performed as a fellow at Yale’s Norfolk Chamber Music Festival, collaborating with faculty and student composers.

Currently pursuing her DMA at UCLA with Grammy Award-winning cellist Antonio Lysy, Anne is a member of VEM Quartet, UCLA’s string quartet-in-residence. Anne’s past performances brought her to many prestigious venues, including the Kennedy Center, the American Cathedral in Paris, Rolston Recital Hall at the Banff Centre, the Britten Studio at Aldeburgh Music in the UK, and the Bing Concert Hall at Stanford University. This year Anne performs the Shostakovich Concerto with the UCLA Symphony. Anne has performed with symphonies in past seasons including the Sonoma County Philharmonic, the Knox-Galesburg Symphony, the Quincy Symphony, and the Southeast Iowa Symphony.

Classical Sonoma wrote of Anne’s performance of Rococo Variations, “The delightful top-to-bottom slides on the fingerboard were impeccable, and in the cadenza Ms. Suda never hurried, letting the long pauses add suspense to the music. She clearly identified with the subtle and non-heroic interplay of cello and orchestra.” Anne has been praised for bringing a fresh and contemporary sound to her repertoire, with the Northwest Reverb writing of her interpretation of the Debussy Cello Sonata, “Cellist Anne Suda read so much contrast into the score, intermittently I felt I wasn't hearing Debussy at all, but discovering his lost contemporary genius…it was the freshest interpretation I’ve heard.”

Passionate about chamber music, Anne is a founding member of two award-winning ensembles. With Anne’s contemporary chamber group Nonsemble 6, she performs an original staged and memorized production of Schoenberg’s Pierrot lunaire throughout the country, receiving a grant from SF Friends of Chamber Music to fund the project. Her ensemble Aleron Trio was in-residence at Britten-Pears, Aldeburgh Music in England and at the Banff Centre in Canada. In addition to performing three tours of France, Aleron Trio won the 2014 Barbara Fritz Chamber Music Award and served as Ensemble-in-Residence for the Old First Concert Series in San Francisco.

Dedicated to teaching, Anne has given master classes and recitals as guest artist at several universities including the Cellobration Festival at Southern Illinois University Edwardsville, Western Illinois University, Stanford University, UC Santa Cruz, and Willamette University. Anne also recently adjudicated at the California Senior String division MTNA competition at UC Santa Barbara. While living in San Francisco, Anne taught at SF Community Music Center, helping to fulfill the school’s mission of bringing music to all people regardless of financial means. She received her Master of Music degree from the San Francisco Conservatory of Music as a student of Jennifer Culp of the Kronos Quartet, studied at the Sydney Conservatorium, and received her Bachelor of Music degree from Vanderbilt University where she double majored in English Literature. Anne began studying cello at age four with her mother Carolyn Suda. 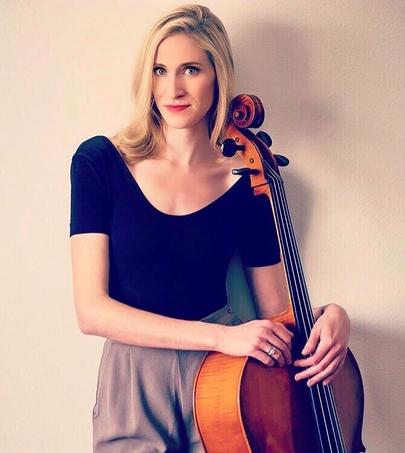 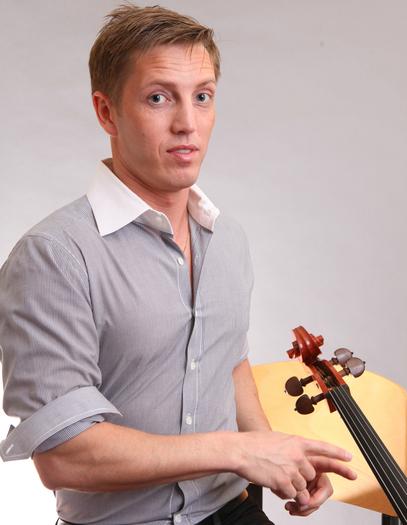 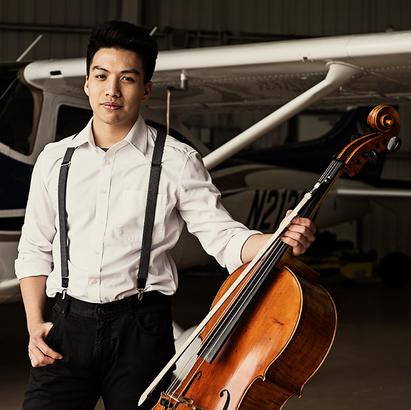 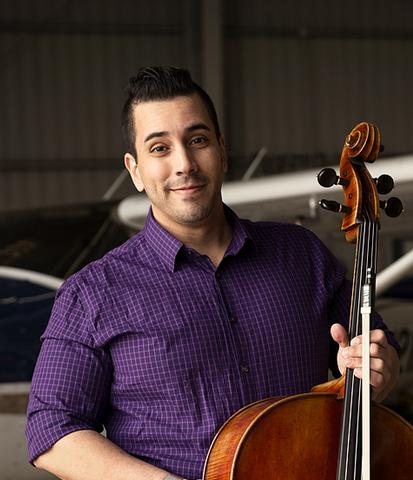 Efraín began cello lessons with prominent composer Nicky Aponte, performing his first complete cello recital only six months later. He graduated with a double major in Music Education and Performance (cello and flute) from the Universidad Interamericana de San German, Puerto Rico. As a student, Efraín was appointed principal cellist of the Mayagüez Symphony Orchestra. After graduation, he joined the Puerto Rico Symphony Orchestra, while studying privately with Jesus Morales at the Puerto Rico Music Conservatory and with Nilda Betancourt.

Efraín relocated to Miami after being invited to join Florida International University’s cello quartet. In 2007, he moved to Tampa to assume the role of principal cellist of the Tampa Bay Symphony, under the direction of Maestro Mark Sforzini. Finally, in 2012, Efraín moved to Los Angeles to join LACQ, which he is proud to call home.

Efraín’s recent Southern Californian appearances include concerts with Rio Hondo Symphony, the Southland Symphony Orchestra, several opera houses, and recitals at universities including University of California Los Angeles and Cal State University Los Angeles. Efraín’s past performance highlights include concerts at the Luis A. Ferré Performing Arts Center in Puerto Rico, at Carnegie Hall, at the Paris Conservatory, at the Rome Music Academy, and at the Santa Cecilia in Rome, Italy.

"An astonishing young cellist RUSLAN BIRYUKOV. The audience gave the concert a standing ovation. If the first concert is any consideration, I would get my tickets early!"
– Wendy Kikkert, Beverly Hills Outlook

"To say the performance was incredible would not do it justice."
- Jose Ruiz, Review Plays

"Ruslan is an extraordinary; one of a kind performer. He has everything: technique, virtuosity, personality, communication, attractive and articulate presence, a great human story and background! He will be a big WINNER!"
– Peter Mark, Artistic Director, Virginia Opera

"Ruslan is a charismatic performer who brings the audiences to their feet. His artistry is both sensitive and passionate and his technical command of the instrument is stunning."
– Eleonore Schoenfeld, Piatigorsky Chair, Thornton School of Music

Founder of the Glendale Philharmonic Orchestra and Los Angeles Cello Quartet, Artistic Director of Positive Motions Concert Series in Los Angeles, cellist RUSLAN BIRYUKOV (Руслан Бирюков) known for his "superb artistry, passion and individuality." Mr. Biryukov represents a new generation of creative professional musicians whose artistic level is recognized not only by awards, but also by a worldwide audience. Ruslan was the only cellist ever invited to perform for 10 consecutive years solo recitals at the Sundays Live Concert Series in the Los Angeles County Museum of Art, the longest running live radio broadcasted concert series in the United States, as well as the only Russian cellist invited to solo with orchestra during the inaugural season of the Renée and Henry Segerstrom Concert Hall in Orange County. Recent appearances include Dvorak cello concerto performances with the Redlands Bowl Symphony and Marina Del Rey Symphony (Summer Series), Glendale Philharmonic (Bestemming Cello Concerto by Sharon Farber, World Premiere) and San Bernardino Symphony in Los Angeles.

Ruslan was born in Baku, Azerbaijan and received his formal music education at the Tchaikovsky Moscow Conservatory in Russia (Master of Music, M.A.), and the USC Thornton School of Music in United States (Artist Diploma and Graduate Certificate). He first earned international recognition by winning major awards in Azerbaijan and by the inclusion of his name in the Golden Book of Russia's international program "New Names". Biryukov has gone on to win numerous other awards worldwide, including the Grand Prize at the 17th Mu Phi Epsilon International Competition.

Since 2003 Mr. Biryukov resides in Los Angeles, United States. He was awarded permanent residency from the U.S. government as an “Extraordinary Ability Artist.” The title means that he has “sustained national or international acclaim and the achievements have been recognized” in his field, according to the U.S. Citizenship and Immigration Services. Additionally, Mr. Biryukov is the only musician in the world granted a US Commercial Pilot license and Certified Flight Instructor single & multi-engine instrument license (SEL,MEL,CFII, MEI). To read more about Ruslan please visit www.CelloArt.com or www.GlendalePhil.com