Though chilly weather and a strong downpour met the audience at the First Baptist Church of Glendale on Sunday night, the music making inside was anything but cold. Hot and intense playing were the hallmarks of the concert with cellist Ruslan Biryukov leading the way. Biryukov, executive director of the Glendale Philharmonic Orchestra (GPO), was the linchpin of the evening: lead cellist in the first half of the night with the Los Angeles Cello Quartet and cellist for the GPO String Quartet in the second half. If there was a disunity of mood between both halves of the concert - one half musical lollipops, the other comprised of modern works that seemed to unsettle some of the bluehairs in the audience - it was at least fused together by way of the virtuoso playing of Biryukov and his crew.
Wilhelm Fitzenhagen is a name that would be totally forgotten today were it not for the fact that Tchaikovsky dedicated his Rococo Variations, his only work for cello and orchestra, to him. Revered in his day as a virtuoso of the cello, the German Fitzenhagen spent the remainder of his life in Russia where he became an influential pedagogue. His "Concert Waltz for Four Cellos," which opened the concert, was an innocuous bit of salon music that set a buoyant start for the evening. Following were a stream of pretty bon-bons, the most memorable of which were a cello quartet arrangement of medieval Armenian chants and excerpts from Khachaturian's deathless "Gayaneh."

The chants, arranged by Yasha Papian of the Komitas String Quartet, were lovely indeed. By turns serene and impassioned, the work's five brief movements showed off the qualities of the Los Angeles Cello Quartet in a most attractive light. Especially impressive were the quartet's judicious use of vibrato.

Aram Khachaturian's genius for composing brilliant and unforgettable melodies assured that his music could succeed in not just its original orchestral garb, but in any number of instrumental arrangements and orchestrations. Such was the case in the arrangement for cello quartet of two of the most frenetic moments from his ballet Gayaneh: the "Lezginka" and the famous "Saber Dance."  The muscular "Lezginka," with its whirling rhythms, pounding drums, and braying horns isn't a likely candidate for a successful transcription to cello quartet. But it's a testament to Khachaturian's lyric strength and the energy and flawless playing of the Los Angeles Cello Quartet that the transcription came brilliantly to life in their hands. No less stunning was the oft-heard "Saber Dance," which bristled with sinewy and tensile fury.Biryukov's playing, wonderfully showcasing some of the best attributes of the Russian school of cello playing, was magnificent. His is a broad, sweeping musicianship of nearly unfettered strength and power. But his cohorts Maxim Velichkin, Trevor Handy, and Mia Barsia-Colombo were equally impressive, imparting a radiant sheen and immaculate precision to the ensemble's sound. 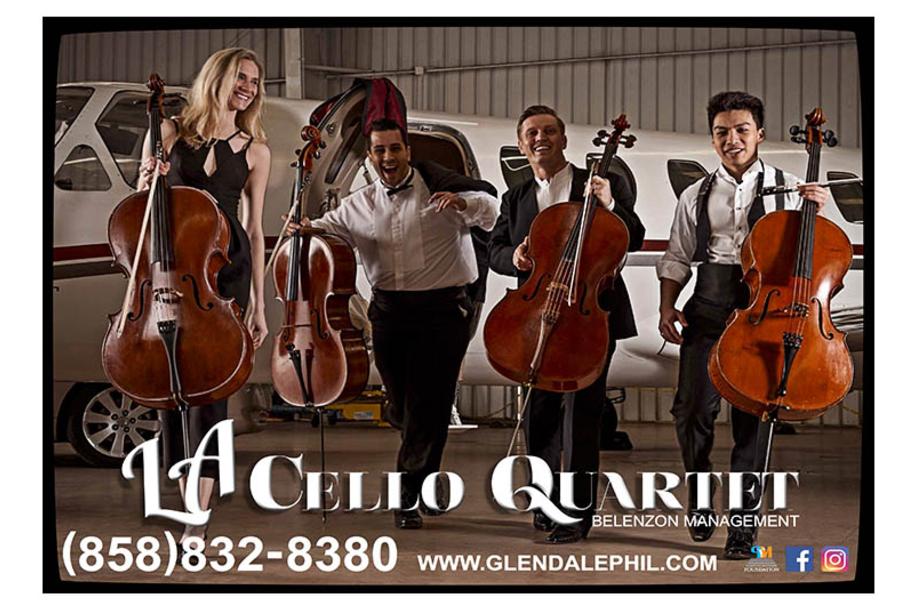